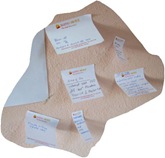 Not that more posts better blog. Own zeal and framework for eol blogging, I post nearly about everything- not judging that often the post articles about tech jargons and socio-political issues in here. This is how supposedly Ekendra’s  blog is to go on for ever, at least with me. More personal means lesser visits, more bakwash means more critics and better PR. Here’s in brief about few days pattern for my better blogging concept.

Having been read the About Web Logs by Susan Gunelius of about.com, Sticky Notes are my- a part of the time frame. I used them like never before, jot anything–virtually anything that hit my mind, post them just ahead in walls, scrutinize them, sort for better concepts inside them, finally make a mood to use a long titles (I usually prefer to use long titles for this blog), fill few paragraphs on the compose area of Windows Live Writer. And here comes a neat, words-connected-sentences-forming-a-no-none-sense blog post. This is a live example.

Once in a while, sticky notes was just as was, useless makeup. With immense use of sticky notes, now I get my everything (if not almost many) in a sensible-bit of organization. Similarly, Future Posts by Google’s Blogger is another key point so as to frequently update posts(frequent update here means Google bots could read me out, and none except few humans) making the world of blogosphere existence of Ekendra’s blog.

Sometimes, future dates could be so helpful — like in this blog Thursday Humors were out for almost 4 months before they would appear for bots. I, however, use them for not more than a span of a week or two. This is a good blogging instant of mine- I guess.

Blogger in draft, in my view, is far better than the regular ada ada of plain Blogger. Once it loads, Ajax Scripts(I guess) would do enough work without CPU efficiency for things to go with blogger post. However, if Windows Live Writer would do me a favor, I’d almost quite Blogger in draft screen that’s Blogger Dashboard for any new postings.

With this end of Sticky notes, I am relieve of some few posts, I wouldn’t be sort of posts. It wouldn’t be months before I post them, except when there’s no Internet Limited Connectivity from NTC.