Like Firefox, Google Chrome (a decent Windows Internet Explorer based browser) has been showing problems since it was left up off from the beta tag last time. My personal experience with Google Chrome and it’s simple interface and light memory consumption was fantastic until recently I came to discover that Chrome is eating out all of my CPU power. This problem persisted when I browsed more tabs in a single window. (Click the screenshots (snap-error-in-google-chrome.JPG) to view details showing Errors in Google Chrome.)

Internet connectivity was fine, more tabs were browsed simultaneously and later I came to discover that errors in Google Chrome are as no exception. It says: Aw, Snap! Something went wrong while displaying this webpage. To continue, press Reload or go to another page. Is Google going to pay me reload the same data? 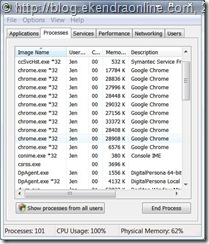 This screenshot (google-chrome-consuming-cpu-power.JPG) shows each tab of Google Chrome is consuming not less than 17 MB of Memory (private working set) @ C:\Users\Jen\AppData\Local\Google\Chrome\Application\0.2.149.29\Installer\chrome\Chrome-bin making the CPU Usage 100% (2×2 GHz)though the Physical Memory is mere 62%.

I tried to find the solution at the official site of Google Chrome but failed to so so. Like fasterfox for loading Firefox faster and working on its prefetch and memory for efficient use of the browser, chrome needs some like when you’re running on more active tabs.

Not that late I came to solve a problem showing error of something went wrong…. just refreshed the page after switching off the Wireless Button ie disconnecting from Internet, it worked- the page was displayed correctly but not all pages. This should be solved by Google as Chrome is hitting market like nothing else like.